Working for you across all price ranges

Getting You Ahead of the Game

Specialist Property Search Agent, based in Cheltenham, finding property for you in Gloucestershire, the Cotswolds, Worcestershire, Herefordshire and into Oxfordshire.

Let me help you make a wise investment and find the property that’s just right for you. Unlike the estate agent who acts for the seller, I’ll be working for you the buyer, just for you. With 28 years expertise in the residential property market I can probably get you to more front doors than anyone can – often ahead of the game. What’s more, I can advise on where best to buy, what’s good value and what’s not, and negotiate the best price on your behalf.

I am able to find and secure a wide range of property types from apartments to country estates, through town houses, holiday homes, building plots and bungalows, buy-to-let and second homes. Let me find the property which best suits your needs.

A fee of 1% *  of the purchase price for finding your perfect home.

No success – No fee

“My wife and I found the home of our dreams with the help of Peter Hampshire . . . . . .  above all Peter listened to our needs and focused on meeting them . . . . . the whole process went smoothly and without a hitch” 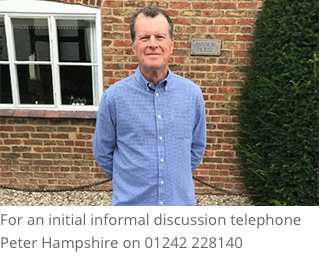 5 reasons why you will benefit from my help


We save you that precious commodity – “time”

We limit the likelihood of your losing out to local buyers

We often have access to “off – market” properties

I will be your “man on the ground”, getting to see properties quickly. Speed is often of the essence

We are frequently “tipped off” with a property about to come on the market – that gem of a property which, through our connections we are often able to get to “ahead of the game”

ABOUT THE AREA WE COVER

Surely one of the most appealing areas to settle in Great Britain are the swathes of our countryside that are Cheltenham, Gloucestershire and the Cotswolds. In the main, the Cotswolds extends across the counties of Gloucestershire and Oxfordshire also reaching into parts of Worcestershire, Warwickshire and Wiltshire. Broadway is in the northern extremity of the Cotswolds with the southern section running up from the Georgian city of Bath into south Gloucestershire, taking in country towns such as Nailsworth, Stroud and Painswick with deep valleys and far reaching views. Nearby Cirencester, a buzzing market town, has many pretty villages such as Bibury and Barnsley close by. Further east towards Lechlade and Fairford the land is flatter but no less attractive. More to the south are historic towns such as Malmesbury with its wonderful abbey and Tetbury – so busy with visitors hoping to catch a royal glimpse or buy souvenirs from the Highgrove shop or maybe take in Chavenage house (Trenwith of Poldark fame). Other picturesque Cotswold towns include Stow-on-the-Wold, Chipping Camden and Burford together with the historic market towns of Stroud and Winchcombe. Bourton-on-the Water is just 16 miles from Cheltenham and is regularly described as one of the prettiest villages in England.

Cheltenham is nationally renowned as one of the most sought after towns to live in in the UK. It is located on the edge of the Cotswolds and has a motto of “salubritas et erudito” – meaning “health and education”. Indeed, it boasts an enviable variety of schools to include Cheltenham Ladies College, Dean Close School and Cheltenham College. Other first class secondary schools include Bournside and Balcarras schools and the town is home to the famous Pates Grammar School.

Cheltenham is known as the cultural centre of the Cotswolds and has recently been described in the New York Times as a town enjoying a cultural renaissance with many “happening spots” and featured in The independent as a “design destination” with “stylish places to eat, drink and stay”.

Easily accessible from the M5 Cheltenham lies just over an hour away from Bristol and Birmingham and under two hours from London.

Cirencester, known as the capital of the Cotswolds, is around 14 miles from Cheltenham. This busy Cotswold town has many shops, places to eat and places to stay. The market square is dominated by the Parish Church of St John the Baptist, and the town still hosts many markets. Cirencester Park and the Bathurst Estate host The Cotswold Show and Polo and is open 8am to 5pm every day throughout the year, where visitors are welcome to walk or enjoy the scenery on horseback.

5 reasons to move to the Cotswolds

In my opinion, nowhere is more quintessentially English than our glorious Cotswolds. The most wonderful verdant patchwork quilt of rolling hills dissected by golden yellow dry-stone walling – a scene which has remained the same for centuries. The towns and villages within are truly some of the prettiest in the UK – and you really are spoilt for choice. Wondering just where to buy can be hard, but what a nice problem to have. And the walking ….. well the walking is hard to beat with such a variety of countryside on hand.

5 Reasons why you will benefit from a Cotswolds property search agent.

We save you that precious commodity – “time”. Frankly, there are often never enough hours in the day. Sometimes we could do with 28 rather than the regulation 24! So, to be spending 5 hours or so in a car on a round trip to the Cotswolds to look at a house which could easily not be suitable is just an awful waste of time. So hiring a property search agent to help you move to the Cotswolds may be a brilliant solution for you. It really is worth considering.